The latest crime figures show that crime in England and Wales fell by 6 per cent. 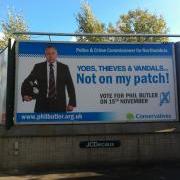 Conservatives in government have a tough but intelligent approach to crime and justice. We are introducing a ‘two strikes and you’re out’ rule, which means anyone who commits a second serious sexual or violent assault will receive an immediate life sentence. We need firm action to take guns and knives off our streets. To punish the middlemen who supply firearms we are changing the law to create a new offense carrying a maximum life sentence. And under laws passed by this government, anyone who wields a knife will go to jail – not just receive a caution.  We believe every community sentence should contain a proper punishment – cleaning graffiti, picking up litter, getting out and doing something positive for the community which has suffered. So Conservatives in government are reforming the system to make that happen.